PJ and I continued our walk across America and Canada on May 24th after we successfully crossed the International Bridge back into Ontario, cleared customs, and connected about a half-mile worth of steps.

It was much simpler getting back into Ontario than it was entering Quebec. The border agent only asked a few questions and didn’t even bother searching PJ. In fact, she never even saw him. I spoke to the agent inside the customs building while PJ lounged on the bus.

I met a man named Peter on the Bridge Bus. He helped me hold onto PJ while we crossed the bridge. The same driver from our first bus trip, Mike, knew the drill and was incredibly helpful once again. I’m positive having PJ completely block the aisle wasn’t up to code, but he sure made my life a lot easier and a bit more entertaining. Thank you Mike and Peter!

Walking north out of the Soo felt odd after a few hours. As the sun dipped lower in the sky, to my left instead of straight ahead, it felt as if we were walking the wrong way. I assured PJ we weren’t lost.

The Can-Can started climbing some pretty impressive hills outside of the Soo. I passed a sign saying “Welcome to the Superior Coastal Highlands.”

We crested a hill, came around a corner, and the road unfolded like a ribbon down into a valley and up a hill on the other side, four or five miles away. My adventure juices started flowing and I could barely contain my excitement as I let out a loud “whooooooo!” on the side of the road.

My enthusiasm was tempered a bit as dark clouds started moving in an hour later. I quickened my pace and got to a country store in Goulais River as light rain started falling. The cashier gave me permission to set up camp at the brush line next to the parking lot. It rained off and on overnight, but the clouds steadily cleared the following morning. I anxiously awaited my first glimpse of Lake Superior.

After walking through a tricky construction zone, I arrived in Havilland and feasted my eyes on Lake Superior. It was big, beautiful, and rugged. I greeted the lake with a hearty hello and said “I’ll begin my walk around you now.” 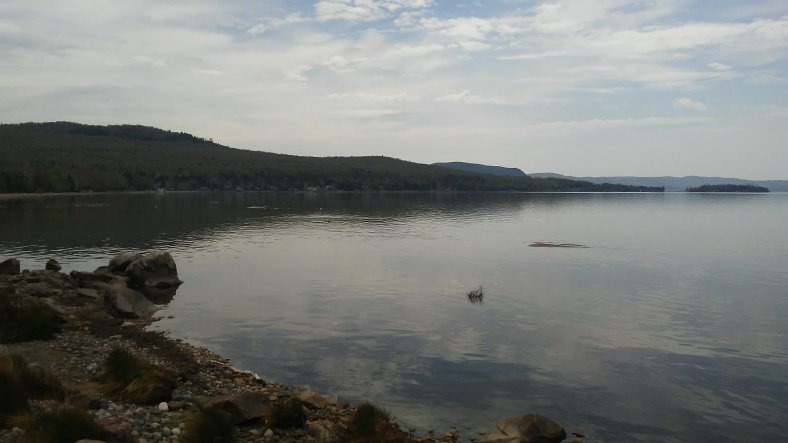 The Trans-Can circumnavigated Batchwana Bay for the rest of the day, giving me some great perspective on how vast Lake Superior is. In the distance I could see some impressive hills which I would walk in coming days.

Sunny afternoon skies gave way to dark clouds and the first rumbles of thunder of the trip.

As the storm approached, an older man pulled over and gave me a chocolate cupcake from a birthday party he was hosting that night. “You can probably camp in the bush at the Provincial Park three clicks ahead.” I didn’t understand two things – what a click was, and why we were weren’t invited to the party. Then I quickly remembered 36 hours on the road transformed me from a respectable looking member of society to a border-line lunatic walking down the road with a three-wheeled stroller.

As soon as the man pulled away, a biblical, torrential rain storm pummeled me. I arrived at the park 30 minutes later after several road-splash facials from passing 18 wheelers.

I took cover at the park’s information kiosk and called an RV Resort a mile down the road to get their camping rates. The owner must have taken pity on me because she made an exception to their “no tenting policy” and let me camp next to the playground, high and dry on a little hill, for free.

The rain let up later in the evening and I walked across the street to the bay, which was covered with a layer of fog. I watched the sun set and marveled at the blessings of the day, despite the soaking.

Another round of storms with some intense thunder and lightning moved through overnight but skies were clear in the morning, other than the consistent layer of fog around the lake.

The ensuing three-and-a-half day, 100 mile walk from Batchwana Bay to Wawa was pure magic. The highway followed Lake Superior’s rugged coastline for a few hours, then turned inland and climbed into the coastal highlands. The road was often even with the canopy of 100 foot pine trees. A relatively reassuring rope guardrail separated the pavement from steep drop-offs.

From the hilltops the lake was always hidden by a layer of fog. When the road returned to lake level, it would plunge into the fog and the temperature would drop 15 degrees.

I was able to camp within a stones throw of Lake Superior for two nights. Once on a little bluff overlooking the lake, and once on a sandy beach I found after doing some offroading on a hiking trail with PJ.

Our sandy camping spot. It was difficult to get to, but well worth it. 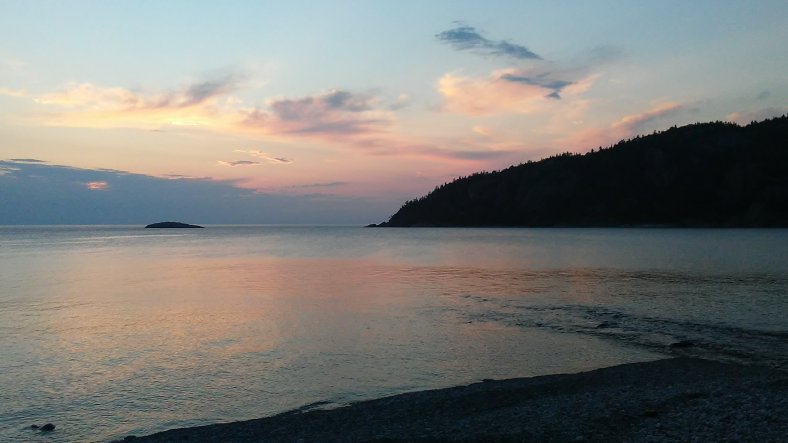 The sunset over Alona Bay. My tent was pitched about 10 feet from where I snapped this photo! What a view, and it only cost free dollars and 26 miles of walking.

There were two big coastal climbs that we walked up and down en-route to Wawa – Montreal and Old Woman Bay Mountains. PJ was loaded down with an extra 45 pounds of water when we left Batchwana Bay (there were only two campgrounds and no gas stations for 100 miles, and I didn’t want to rely on a campground for water). Fortunately, PJ is on a rapid weight loss plan. He looses about 12 pounds of water weight per day. The climbs came on days two and three out of Batchwana Bay, so he was a little lighter, making for slightly easier climbs. 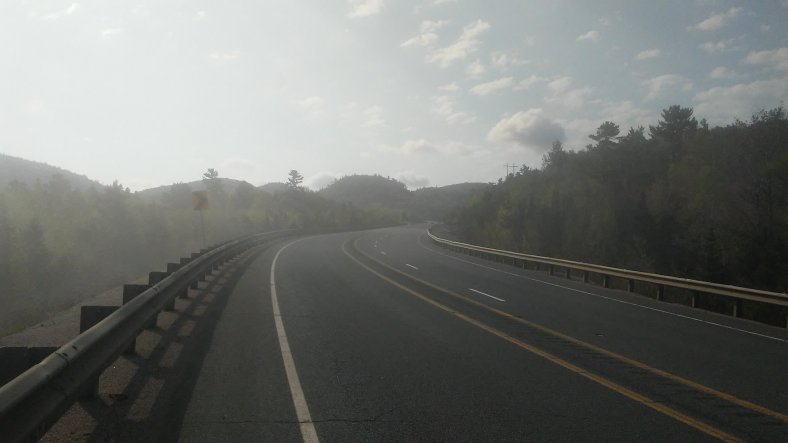 We quickly climbed out of the fog at the base of Montreal Mountain and tackled the two mile ascent. It wasn’t like climbing a mountain pass out west, but still left me breathless (because of the elevation gain and the views)!

I ended up walking 36 miles the day before arriving in Wawa in order to have a short, two hour walk into town. My time in Wawa has essentially been a rest day. I chatted with a number of people in town while I wandered around, and also did a few of my favorite trip activities – drank chocolate milk, ate Subway, and grocery shopped.

The owner of the Wawa RV Resort, Renee, has let me camp for free for the night. I happily did laundry (and now have clean socks again!), trimmed up my beard, and have met some nice folks at the campground. A few of my neighbors popped by to visit and offered some friendly words of encouragement….plus a bag of homemade cookies and some warm popcorn.

I am about 290 miles from Thunder Bay and will turn back Ouest in a few days. White River (two days), and Marathon (four days), are the next stops on the bushy horizon.

Roadside Change – $4.66 I only found one coin in the last six days. It was very rusty and difficult to identify, but I am pretty sure it is a well-traveled quarter.

Favorite Roadside Find – A toss up between a Florida license plate and an unbroken bong. Both led me to wonder why they were thrown out or left on the roadside.

So many to choose from!

I was thrilled to get a selfie with yours truly, PJ, and the massive “Wawa Goose” all in one frame! I saw my first sign for the goose outside Deep River (350 or so miles ago). I couldn’t wait to honk at her when I arrived in Wawa (even though I honk at geese when I pass them daily on the highway). This one was a milestone!

This was taken from the highway shoulder as I started climbing “Old Woman’s Bay” Mountain. The fog was thick over the lake but the sky was clear after gaining a little elevation. To be honest, that old woman was a bit crotchety and stubborn, because that hill kept going, and going, and going. It was a challenge after I had already walked 27 miles that day. 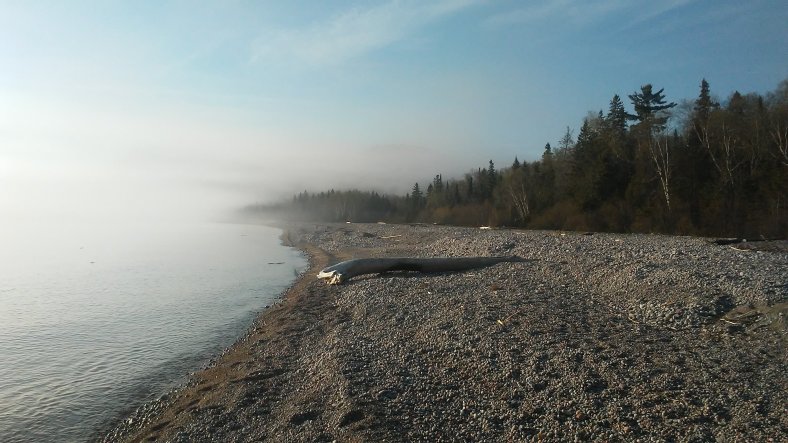 I followed a little hiking path to the lake for lunch on my fifth day out of the Soo. This particular stretch of lakefront, which I nicknamed “Driftwood Beach” was littered with massive tree trunks and stumps that Superior had returned to shore. It was a reminder of the power that this lake has! It moves gigantic, hundred year old trees like toothpicks!

I am hoping to have a string of marathon distance days on my way to Marathon, Ontario!

One thought on “North?”